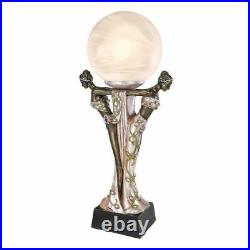 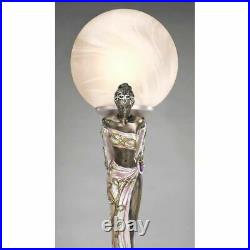 Add a softly romantic, Art Deco-style glow to entryway or boudoir with this classically dramatic illuminated sculpture that pays homage to the revered works of the Russian-born sculptor, Erte. True to his concept of feminine beauty, twin maidens in a duo-tone metallic finish sprinkled with tiny faux jewels and golden vines hold aloft a shining 5 -dia. Cast in quality designer resin atop a faux ebony base.

Switch on cord; 25-watt bulb. Russian born artist and designer Romain de Tirtoff, also known as Erte, a French pronunciation of the initials R. Was an accomplished artist and designer. He is most famous for his elegant fashion designs that capture the art deco period in which he worked. In 1912, while living in Paris, Erte was signed with the journal Harper's Bazaar where he continued to produce fashion drawings for the next 22 years. Erte's best-known image is Symphony in Black, which depicts a slender woman draped in black holding a thin, black dog. This image has been reproduced countless times.

Erte had a career revival in the 1960s when the Art Deco movement was in full force and Erte branched out into limited edition prints, bronzes and art as clothing, becoming unquestionably one of the foremost fashion and stage designers of the early 20th century. Erte's taste for the exotic and romantic as well as his appreciation for the lyrical and sinuous human figure can be seen in his originals as well as in homage.

The item "Art Deco Style Twin Maidens Sculpture Table Lamp By By Artist Erte" is in sale since Wednesday, February 7, 2018. This item is in the category "Home & Garden\Lamps, Lighting & Ceiling Fans\Lamps". The seller is "atlantisgift" and is located in New York. This item can be shipped to United States.